You are here: Home / Sports / Bucks get 30th win at All-Star break 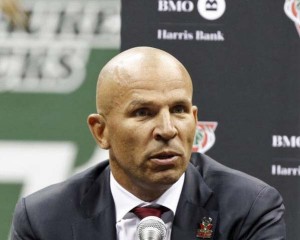 The Milwaukee Bucks enter the all-star break after winning their 30th game of the season, 111-103 over the Sacramento Kings at the BMO Harris Bradley Center on Wednesday night.

The Bucks (30-23) won their sixth straight home game and doubled their victory total of 15 from a season ago.  They became the first team in league history to accomplish that feat before the break.

AUDIO: Jason Kidd says all 30 wins have been team wins :14

DeMarcus Cousins had 28 points, 19 rebounds and five assists for the Kings.  Sacramento’s Tyrone Corbin wraps up his stint as interim coach.  He’ll be replaced after the break by former Bucks head coach George Karl.

The Bucks have 29 more games to play following the all-star break.