A provision in Governor Scott Walker’s proposed 2015-2017 state budget would allow University of Wisconsin System campuses to stop reporting sexual assaults. The language is part of the governor’s larger proposal to grant greater autonomy to the UW. A summary of the governor’s budget compiled by the nonpartisan Legislative Fiscal Bureau noted that the language is just one of a number of changes included under a plan to create a UW System Public Authority.

“The bill deletes a number of current law provisions that require or permit the Board of Regents to take a specific action or specific actions. These deletions are described in the following section. In most cases, the UW System Authority Board of Regents would have the authority to take the actions described although the Board would no longer be specifically required or authorized to do so by law.”

The provision set off a flurry of criticism from Walker opponents on Friday. 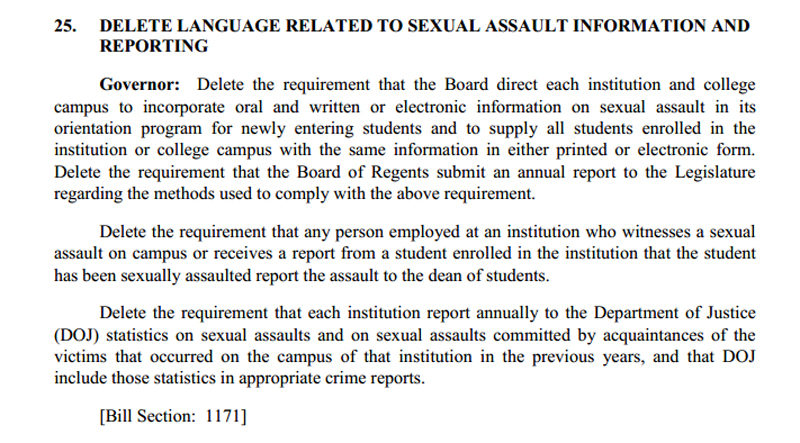 Walker spokeswoman Laurel Patrick said that changes to state statute were required to give UW System full authority status. “The UW System requested the deletion of provisions of duplicative reporting requirements as part of the move to the authority. In this case, UW System requested this report requirement be removed because there is already a federal reporting requirement related to sexual assault and harassment on campuses,” Patrick said.

“The state statutory changes in no way lessen our commitment,” said Heather LaRoi with the Office of University Relations. “They allow us to focus on one report. Many requirements proposed for removal from state statutes are duplicative of federal requirements and reporting standards we comply with and are deeply committed to.”

LaRoi noted that a new UW System Task Force on Sexual Violence and Harassment was appointed last fall as part of ongoing work to examine and strengthen efforts to address sexual violence and harassment on campus.

Patrick noted that Walker “has made protecting victims of domestic violence and sexual assault a top priority,” and pointed out that his last budget increased funding for sexual assault victim services and provided funding to support partnerships and state initiatives to shelter and protect victims of domestic abuse. “His recent budget proposal increases funding to continue protecting victims and their families,” she said.