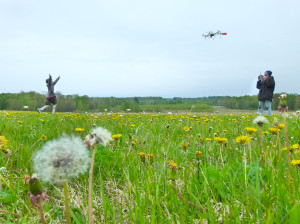 Federal aviation officials are out with a proposed set of guidelines for the commercial use of drones, which could provide some guidance for operations hoping to implement the technology for everything from surveying crops to inspecting bridges. Brian Landers, a law enforcement drone training instructor at Madison College, says the rules are a “step in the right direction” for a rapidly growing industry.

The regulations are aimed at the commercial use of small drones, weighing less than 55 pounds. They include requiring operators to pass a written proficiency test, while setting altitude and speed restrictions. They also require pilots to keep drones in sight, at least for now blocking the possibility of Amazon or other companies using them for deliveries.

When adopted, Landers says the rules will make it easier for businesses to implement drones in their daily operations, although he expects it will still be uncommon for people to see them for at least the next five to ten years. He says “I do think that when you see a new building going up or a bridge going up, you might see a drone being deployed to help with the safety observations…but you’re not going to be seeing it zoom by your window or fly over a highway on a regular basis.”