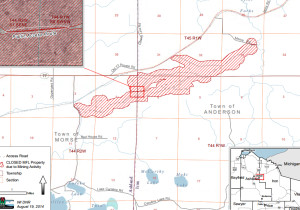 A map showing the potential location of a mine. (Photo: DNR)

A company exploring the possibility of creating an iron ore mine in northern Wisconsin’s Penokee Hills has announced plans to close down its office in the area, putting the future of the project in question.

In a statement released Friday, Gogebic Taconite President Bill Williams said the company will “continue to investigate the possibility of pursuing a permit to mine the Upson site but cannot justify maintaining an office in Hurley without a prospect of immediate action.”

The project has seen a number of delays, including GTac’s decision to hold off on conducting field observations in the area. Williams also noted that the company’s “environmental investigation and analysis of the site has revealed wetland issues that make major continued investment unfeasible at this time.”

The decision comes after more than two years of controversy over the project, which saw Wisconsin lawmakers make changes to state law that were designed to give GTac more certainty about the permitting process. Tribal leaders and environmental groups vowed to fight the project, while federal officials have indicated their time tables for reviewing any mining permit would not be advanced just because of changes at the state level.

Wisconsin Manufacturers and Commerce Vice President of Government Relations Scott Manley echoed concerns about potential EPA action derailing the mine. In a statement, Manley noted that “Governor Scott Walker and the Wisconsin Legislature took great steps toward improving Wisconsin’s regulatory process for iron mining; however, they can’t control the EPA’s outright hostility toward the industry.”

Manley said that WMC remains hopeful that a mine project will come to fruition in Iron County at some point in the future.