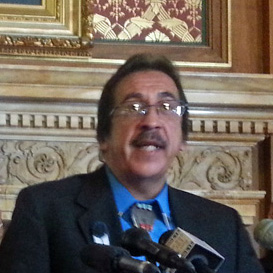 With a final deadline now just days away, it doesn’t look as if Governor Scott Walker will be meeting with Menominee tribal representatives who are hoping to have him reconsider his rejection of the tribe’s Kenosha casino plans. “It’s kind of like having a meeting about a bill that’s been signed into law,” Walker said during a stop in Kenosha on Tuesday. “Once the law is signed, another meeting isn’t going to change what the law is. This effectively was like me signing the law into effect. When I noticed the Bureau of Indian Affairs, we made it clear that was our decision.”

Walker was in Kenosha to announce that Toolamation Services, Inc. is moving from Zion, Illinois to Kenosha, bringing about 50 jobs. While Walker was inside a south side building making the announcement, Menominee Tribal Chairman Gary Besaw joined about two dozen protesters across the street.

“He needs to sit down and look at it (the Menominee offer to help finance a new NBA arena in Milwaukee),” said Besaw. “He has until the 19th. The Bureau of Indian Affairs said he can reconsider this.”

Walker said his administration’s rejection of the proposed Hard Rock Menominee Casino was “made in a very comprehensive way” and that “reaction we’ve got across the state has been fairly positive.”

State Representative Peter Barca (D-Kenosha said he’s mystified with the Governor’s stance, and thought it was ironic that Walker chose this time to come to Kenosha for a small jobs announcement. “I’ll tell you, you go to any coffee shop in the Kenosha and Racine area and you’re going to get a blistering response, because people are just extremely angry,” Barca said.

State Representative Tod Ohnstad (D-Kenosha) said that if the governor were not running for President, he would have approved the casino. “The petition of 600 ultra conservatives from Iowa, to not open the casino, and then the fact that he made the announcement on the eve of his speech in Iowa, just certainly begs the question,” Ohnstad said. “This is the only logical explanation.”

After watching the governor’s car drive past him, Besaw said too much is at stake, and there are too many misconceptions about the project, for the Governor not to meet with him. “As leaders I think we need to sit down, and if he has concerns we’re more than willing to sit with him and clarify where he might have those misconceptions from the faulty analysis that Secretary (Mike) Huebsch had given him,” Besaw. “A good leader would turn over every to make sure that what he was doing is indeed correct.”

Besaw left to rejoin marchers on their way to Madison, where they’ll arrive at around midday on Wednesday – and hope to meet with the governor.

WRJN contributed to this report