You are here: Home / Sports / Green Bay Phoenix women in the drivers seat 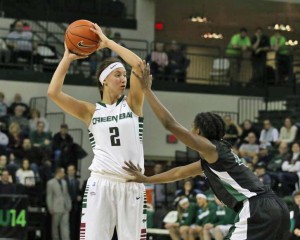 The win leaves Green Bay (19-4, 9-1 Horizon League) in the driver’s seat for their 17th straight Horizon League title.  They’re up 2-full games on Wright State in the Horizon League, plus they own the tie-breaker.

Green Bay never trailed in this game and they held down a Wright State team that averaged 98.3 points in its last three games.  The Raiders came into the game averaging 79.6 points a game for the season.

The Phoenix hit the road to face the Milwaukee Panthers on Saturday at 2 p.m.