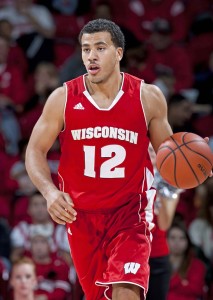 Wisconsin senior guard Traevon Jackson is still wearing a walking boot and he hasn’t been cleared to return to practice yet.  But Jackson told reporters on Sunday that he will return to play for the Badgers in their home finale against Michigan State.

Jackson has been out since breaking his right foot Jan. 11 at Rutgers.  Wisconsin (25-2, 13-1 Big Ten) is a perfect 10-0 since then, with Bronson Koenig taking over at point guard.

Jackson said he doesn’t anticipate practicing today and the Badgers play at Maryland on Tuesday night.  He said he’ll probably return sometime after that game.

Koenig has scored in double figures in eight of his ten starts since taking over for Jackson.  He is averaging 12.6 points and shooting 48% from three-point range.