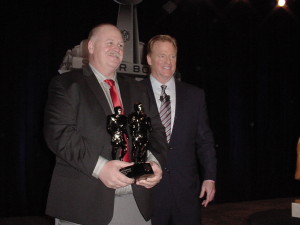 Somerset high school football coach Bruce Larson was awarded the Don Shula NFL High School Coach of the Year award this past weekend at the Super Bowl in Arizona.

Larson is a 28-year coaching veteran who has spent his entire coaching career at Somerset High School.  Larson just completed his 16th season as head coach, capping off a perfect 14-0 record with a Division 4 WIAA State Football Championship.  Each of the three award finalists received a $2,500 cash award and a $5,000 grant for their high school football programs.

Larson was also honored this year with the WFCA/Packers Coach of the Year award, presented to him at the Packers’ final regular season home game against Detroit.  The Packers donated $2,000 to the Somerset football program.