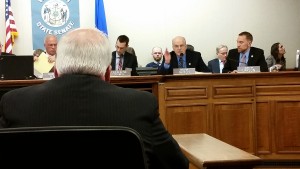 The Senate Labor Committee heard conflicting testimony on the potential impact of the controversial bill from business owners, economists, academics, and union members.

Right-to-work would prohibit employers from requiring workers to pay union dues as a condition of employment. Senate Republican Leader Scott Fitzgerald (R-Juneau) says the bill would help grow the economy. “The status quo has served us well in the past, but in order to see our economy continue to compete at a global level we cannot remain mired in the antiquated system.”

The Senate expected to take up the bill Wednesday. Both houses of the legislature say they have enough votes to pass the bill. Governor Walker says he will sign it when it gets to his desk.