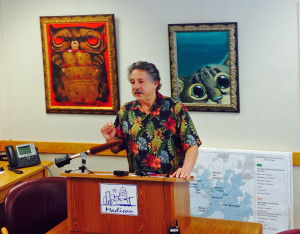 The mayors of Madison, Green Bay, and Racine were among those who survived primary challenges on Tuesday. Madison Mayor Paul Soglin received 53 percent of the vote, and will run against Alderman Scott Resnick in the April election. Resnick picked up 23 percent of the total vote and three other challengers were eliminated. Soglin has spent 18 years as Madison’s mayor over three separate terms. His current term began in 2011.

In Green Bay, 12-year incumbent Mayor Jim Schmitt received 51 percent of the vote in a three-way primary. Common Council president Tom DeWane got 37 percent, and he’ll face Schmitt in April. David Vanderleest was eliminated with 12 percent. If Schmitt is reelected, he’ll be the longest-serving mayor in Green Bay history if he completes his four-year term.

In Racine, Mayor John Dickert and Melvin Hargrove advanced to the April contest. Dickert got 41 percent of the vote, and Hargrove had 30 percent. Two other candidates were eliminated.