You are here: Home / News / Menominee members marching to Madison 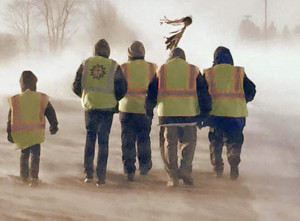 About a dozen members of the Menominee Indian tribe are walking to Madison to urge Governor Scott Walker to change his mind about rejecting a proposed Kenosha casino.

Over a hundred people attended a rally this morning at the tribe’s headquarters in Keshena. With temperatures in the single digits, walkers then started heading to several locations where they’ll state their case for the governor approving the casino. Stops are planned in Manawa, Waupaca, Wild Rose, Montello, and Pardeeville. The marchers expect to reach the State Capitol next week, where they’ll seek a meeting with the governor.

Governor Walker said no to the project well before the federal deadline of February 19. The tribe believes he can change his mind before then, but the governor has said he does not believe it’s possible. Walker believes the state could be on the hook for hundreds of millions of dollars in payments to the Potawatomi tribe if that group’s casino in Milwaukee loses revenue due to the Kenosha project.

This week, the Menominee offered to cover the state’s share of bonding for a new Milwaukee Bucks’ arena, in exchange for allowing the Kenosha casino. Walker’s administration has said they don’t view it as a serious offer, and questioned how the tribe would cover the costs.