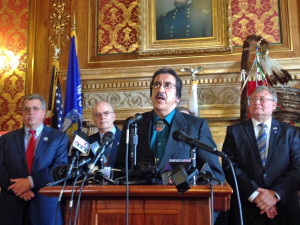 Governor Scott Walker’s administration is signaling that a “Menominee Bucks for Milwaukee Bucks” offer from a tribe seeking to build an off-reservation casino is not going to change the governor’s mind.

Menominee Chairman Gary Besaw said that in addition to keeping the Bucks in Milwaukee, the move would enable money which Walker currently has earmarked for a new arena to be redirected to support the University of Wisconsin, public schools and other critical needs.

Besaw and Hard Rock International Chairman Jim Allen held a news conference Tuesday afternoon in the Assembly Parlor of the State Capitol, to announce what they  described as a “game changing offer.”

“We have watched with interest as Governor Walker has proposed using $220 million in public money to help build a new Milwaukee arena for the Bucks, and we’ve watched as state legislators, conservative groups and others from throughout Wisconsin and across the political spectrum object to using taxpayer money for such a project when the State is cutting UW funding by $300 million, reducing care for our seniors, lacking money to support public schools and is being forced to borrow hundreds of millions of dollars for our roads,” Besaw said. “Our proposal eliminates a big political problem and creates a major advantage to state taxpayers. We want Wisconsin to stay big-league. But we also want to help make sure State taxpayers don’t bear the financial burden of keeping the team.”

Besaw also said the Menominee will increase to $275 million the bond it would post to cover any potential losses from other gaming agreements. The $220 million arena contribution and the $275 million bond would be on top of the $1.2 billion in Kenosha casino gaming proceeds the tribe has already committed to the State of Wisconsin, making for a total contribution to the State of $1.7 billion.

“I’m not sure anything more I can offer the governor or the state of Wisconsin,” said Allen. “Basically we’re saying we’ll work for free, if we’re not able to reach the revenue projections that we believe is in the business model.

State Senator Van Wanggaard (R-Racine) said the new offer from Hard Rock and the Menominee tribe warrants consideration by the Walker administration. “I’m hearing the numbers just don’t seem to be working out,” Wanggaard said. “If the numbers don’t work out Hard Rock would not be here.”

“If the governor was being straight with the citizens of this state, when he said his sole objective was protecting the taxpayers, then its inconceivable, when he reviews this offer when he comes back from London, that he wouldn’t approve it,” said state Assembly Minority Leader Peter Barca (D-Kenosha).

Walker is scheduled to return from a trade mission to the U.K. on Friday, and the Menominee and Hard Rock have requested an opportunity to meet with him.

“We ask that the governor reconsider that decision based on the new information that has come forward,” Besaw said. “We really pray that he takes us serious, because we are serious.”