You are here: Home / Business / Menominee rally at Capitol but get no meeting with Walker (VIDEO) 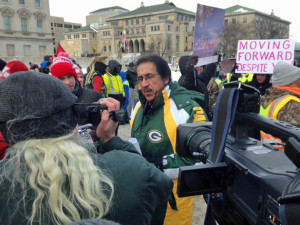 There was disappointment for the Menominee tribe on Wednesday – along with a sense of solidarity. A group of tribal members walked from the Menominee Reservation to Madison, where Menominee chair Gary Besaw hoped to meet with Governor Scott Walker to discuss the proposed Menominee Hard Rock Kenosha Casino, which Walker rejected last month. “We’d ask that we sit with us,” Besaw told reporters at the Library Mall on the University of Wisconsin campus.

Hundreds of Menominee tribal members and supports walked up State Street to the Capitol over the noon hour, where they joined hundreds more for a rally in the Capitol rotunda which included tribal representatives and elected officials – of both political parties – from the Kenosha area.

“This should have happened,” said state Representative Samantha Kerkman (R-Powers Lake), one of many southeastern Wisconsin legislators who were dismayed when Walker rejected the proposal.

Besaw asked the governor to “set aside politics,” before walking up a flight of stairs to the governor’s office, accompanied by dozens of supporters and a throng of media. Walker was not in. Besaw said he was disappointed, and that the tribe will now weigh its options – including those outside of Wisconsin.

“We are Wisconsin.We are part of Wisconsin. We’ve been here 12,000 years. We would rather stay partners with Wisconsin,” Besaw said.

Wednesday’s rally came less than a month after Walker, citing concerns to state taxpayers, rejected the casino proposal. That decision came more than a month before the Bureau of Indian Affairs deadline of February 19th, and last week the Menominee and Hard Rock International made a proposal which included financial assistance for construction of a new NBA arena in downtown Milwaukee.

The Walker administration rejected that offer, and on Tuesday of this week Walker sent a letter to the tribe outlining the administration’s reasons for doing so. At that point, tribal members had already been on the road for several days on their 156 mile walk from Keshena to the Capitol.