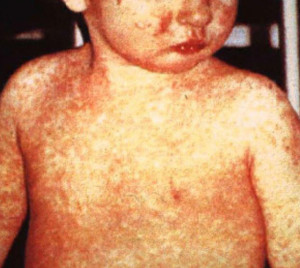 A child with a measles rash (Photo: CDC)

Health officials in central Wisconsin are monitoring two patients for signs of measles.

Portage County Health Officer Gary Garske says two people are in isolation, awaiting test results. Garske cannot disclose if the suspected cases are adults or children, male or female, or where in Portage County they live, but he did say there is no known association between the two patients.

Measles is a highly contagious respiratory disease caused by a virus. It spreads through the air through coughing and sneezing. About three out of 10 people who get measles will develop one or more complications including pneumonia, ear infections, or diarrhea. The disease can be prevented with the help of a vaccine.

According to the Centers for Disease Control and Prevention (CDC), measles is a viral disease. Cases of start with a fever, cough, runny nose, or conjunctivitis. A characteristic rash usually appears about 7-21 days after a person is exposed. The rash spreads from the head to the trunk to the lower extremities. People are considered to be contagious from four days before to four days after the rash appears.

Public health officials request that individuals who have symptoms stay home and contact their medical provider by telephone for instructions before traveling anywhere, including medical facilities. He says clinics and hospitals may need to isolate the patient immediately, and not expose other people.

Garske says he is not aware of any confirmed cases of measles this year anywhere in Wisconsin, although a national outbreak has seen 121 cases reported in just the first few weeks of the year so far.