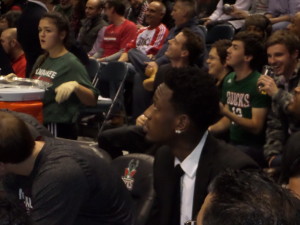 According to an ESPN.com report, the Milwaukee Bucks and center Larry Sanders have begun discussions that could lead to Sanders becoming a free agent.

Sanders has served a 10-game suspension for violating the league’s anti-drug program but has not returned to the team and is not expected to play for Milwaukee again.  He has been listed as out for “personal reasons” in each of the Bucks last three games.

When asked last week about Sanders’ status, Bucks coach Jason Kidd told local reporters: “That will be determined during the break.”

The Bucks (30-23) have played well without Sanders this season.  During his most recent suspension, Sanders forfeited more than $1 million of his $11 million salary this season.

The Bucks are off until Friday when they host the Denver Nuggets.