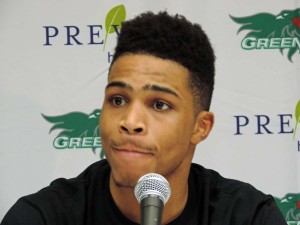 Sykes is one of four seniors on the Green Bay roster that hail from the Windy City (Greg Mays, Alfonzo McKinnie and Josh Humphrey the others) and will be playing their final collegiate game in their hometown.

Sykes is second on Green Bay’s all-time scoring list, behind leader Tony Bennett (2,285) as the only Phoenix player to score at least 2,000 career points.  He would also become the 10th player in Horizon League history to reach the mark and the lone player in league history to accumulate 2,000-plus points, 400-plus rebounds and 400-plus assists.

Sykes has been the starting point guard for the Phoenix for the past four seasons, starting 120 games entering tonight.  Last week, Sykes was named one of 17 finalists for the 2015 Bob Cousy Award, handed annually to the nation’s best point guard.