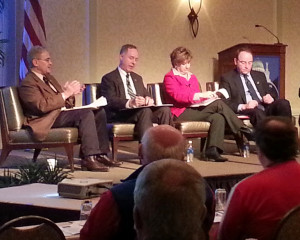 Less than a day after Governor Scott Walker unveiled his budget plan, Republican lawmakers were already looking at possible changes to how Wisconsin will fund transportation projects in the next biennium.

Speaking to a meeting of the Wisconsin Counties Association in Madison Wednesday morning, state Senator Tom Tiffany (R-Hazelhurst) said his “biggest heartburn” about the governor’s budget comes from the amount of bonding in the plan. The governor’s budget calls for borrowing about $1.3 billion to fund transportation projects in the state, and Tiffany joined several Republicans who want other options explored.

The Hazelhurst Republican suggested lawmakers may have a discussion in the budget about Wisconsin’s prevailing wage law, which he said “should be on the table” as officials look for the most efficient and effective way to deliver on road construction projects.

Assembly Speaker Robin Vos (R-Rochester) also indicated that he’s open to alternatives for funding transportation projects, and noted that new revenue sources are needed to keep the state’s transportation system from declining. Vos told county officials that he favors looking at toll roads or instituting a mileage based registration fee for vehicles. Vos said “I believe in a mileage based system, where the more you drive in Wisconsin the more you should pay. If you are somebody who drives just to and from the grocery store, you should pay a lower amount of your registration fee…than someone like me, who drives 50,000 miles a year in my job.”

Vos also suggested moving public transit out of the transportation fund. He has argued that, while important to helping people get around, bus systems are more of a “social program” and should be paid for out of the state’s general fund.

Lawmakers will explore options in the months ahead, as they get to work on the governor’s budget proposal.