You are here: Home / News / Unions rally to oppose right-to-work 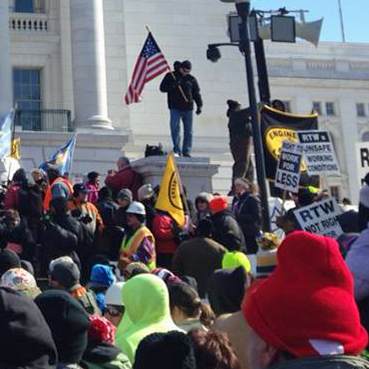 Saturday was sunny, windy and cold as hundreds gathered at the state Capitol in Madison to oppose fast-moving and controversial right-to-work legislation in Wisconsin. “I stand before you, as a proud teacher and union member, not as a terrorist,” said WEAC President Betsy Kippers, directing a jab at comments made this week by Wisconsin Governor Scott Walker.

The right-to-work bill passed the state Senate this week. Democrats and labor unions have argued that the legislation is unneccessary, opposed by many businesses, and harmful to workers. Republicans argue right-to-work is about the freedom of individual workers to not join unions, and they claim it will make Wisconsin a more attractive destination for businesses. If passed and signed into law by Republican Governor Scott Walker, Wisconsin would become the 25th right-to-work state.

“This isn’t good for Wisconsin,” Wisconsin Laborer’s District Council President John Schmidt told the crowd gathered on the State Street steps at the Capitol. “It’s another part of ‘divide and conquer.’ And make no mistake about it: right-to-work is designed to divide us.”

“This legislation, which is a lie that is covered by a thin cloak, of a claim of worker freedom. When we remove this cloak and see the bill for what it is, you see the body of labor suffering the death of a thousand cuts, one scab at time,” said Bill Carroll, President of Teamsters Local 200 in Milwaukee

Union members and supporters were urged to show up this week as the bill moves through the process in the state Assembly next week. “I see whole families coming together to stand up for worker rights, and that is beautiful,” said Wisconsin AFL-CIO’s Stephanie Bloomingdale. “And you know what? We are beautiful, and we are not terrorists.”

The state Department of Administration put the crowd at 2500-to-3000.