You are here: Home / Education / United Council pushing back against UW budget cuts 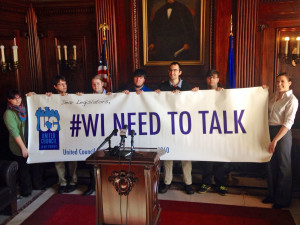 Governor Scott Walker’s proposed $300 million dollars in cuts to the University of Wisconsin System over the next two years, along with an offer of greater autonomy and flexibility, through creation of a public authority. The United Council of UW System Students oppose those cuts, as well as making the UW System a public authority.

“A budget is a value document, and the governor has been clear that he devalues higher education in the state of Wisconsin, to the tune of $300 million,” said United Council Executive Director Nneka Akubeze. “That’s unacceptable, and the students are outraged.”

UW Superior Student Senate Speaker Kara Schmidt said budget cuts have already had an impact at the school, which has the smallest enrollment of all four-year campuses. “It’s not because that’s what’s right for our school, but because it’s what we fiscally have to do,” Schmidt said. “That’s a business decision that’s not an educational priority decision.”

UW Madison professor Karma Chavez said the campuses need to stick together. “We need UW Superior just like we need UW Madison. We need all of the UWs. And the fact of the matter is, it’s going to be a lot worse for the smaller UWs,” Chavez said.