You are here: Home / News / Walker responds to letter from teacher of the year (AUDIO) 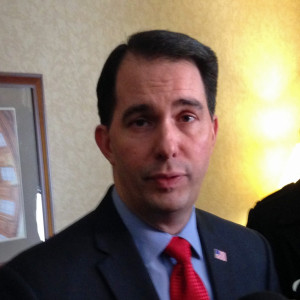 During a stop in Iowa last month, Governor Scott Walker told the story of Megan Sampson. The young teacher was laid off from her school district shortly after winning an “outstanding teacher of the year” award, which the governor has argued was the result of collective bargaining protect the job of a teacher with more seniority.

The story is one Governor Walker has told before to highlight the benefits of the controversial collective bargaining reforms he championed after taking office in 2010. However, the example came under scrutiny this week when Claudia Klein Felske, the 2010 Wisconsin High School Teacher of the Year, questioned the merits of the award Sampson won.

Sampson was awarded the “Nancy Hoefs Memorial Award,” which is given to an outstanding first year language arts teacher by the Wisconsin Council of Teachers of English. Felske points out that Sampson was one of less than a dozen candidates, who self-nominated themselves for the award. In an open letter to the governor posted this week on a Marquette University blog, Felske argued that Walker “blamed the seniority system for Sampson’s lay-off when, in good conscience, you should have done some serious soul searching and placed the blame squarely on your systematic defunding of public education to the tune of $2.6 billion that you cut from school districts, state aid to localities, the UW-System and technical colleges.”

Walker responded to the criticism Thursday in a call with reporters from London, where he’s currently on a trade mission. He called Felske’s argument a “petty distinction,” and said the story is still valid for showing the benefits brought about through his collective bargaining reforms. He said it also shows how funding issues have been handled differently under his administration, compared to cuts made to education by former-Governor Jim Doyle that resulted in layoffs. The governor said people are just trying to redirect attention away from the facts of how his reforms have helped school districts.