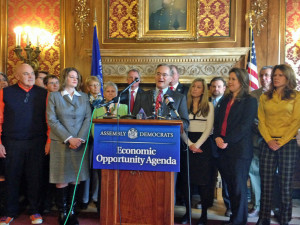 It’s unclear whether any of the Democratic proposals will get the bipartisan support needed to advance. “We hope that they’ll recognize that these ideas are not partisan ideas,” Barca said of Republicans, who control both chambers of the legislature. “Really, it’s hard to imagine that they won’t support every one of them.”

Representative Chris Taylor (D-Madison) serves on the budget writing Joint Committee on Finance. She said Democrats will continue to advance bipartisan efforts throughout the budget process. “But these are exactly the kinds of initiatives that should be in the budget, frankly,” said Taylor.

“The Democrats’ agenda looks like more of the same recycled ideas to increase the size of government and increase government spending,” said Speaker Robin Vos’ Communications Director, Kit Beyer. “Assembly Republicans are focused on reforming government, growing the economy and making the right priorities for the state by using the resources that we have.”

The Democrats unveiled their proposals over the noon hour at the Capitol in Madison Wednesday, at about the same time that Republican Governor Scott Walker delivered remarks in London as part of his trade mission to the United Kingdom.