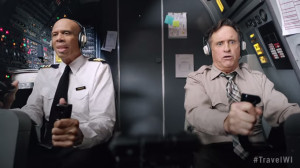 The head of Wisconsin’s Department of Tourism is taking criticism of a state ad campaign in stride.

The TV advertisements, which features cast members from the comedy classic movie “Airplane” talking about Wisconsin attractions, were recently referred to by Minnesota Governor Mark Dayton as the “most idiotic thing” he’s ever seen. State Tourism Secretary Stephanie Klett is thanking the governor for his comments, after she says social media “went crazy” in response.

Klett says Dayton’s slam actually resulted in a big increase in views for the campaign, amounting to about $600,000 in free press for Wisconsin’s tourism efforts. She says her office put together a gift basket filled with Wisconsin products to help thank the governor, and adds that some Minnesota residents have even offered their support for the ad campaign with comments left online.