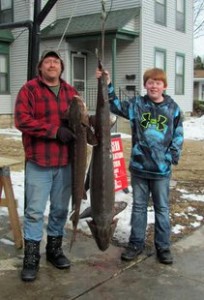 Father and son team — Robert Drexler, 44, and his son, Derek, 12 — were fishing out of the same shack on Lake Winnebago on the final day of season. Derek speared a 70-inch sturgeon that weighed 76 pounds. A half hour later, the elder Drexler speared a smaller sturgeon, 50 inches and 24 pounds. They registered at Jerry’s Bar in Oshkosh. (PHOTO: Wisconsin DNR)

On the day when officials with the Wisconsin Department of Natural Resources said was the nicest weather of the season, the annual sturgeon spearing period ended.

DNR Sturgeon Biologist Ryan Koenigs says an additional 136 sturgeon were harvested on Saturday, bringing the season total to 2,158 fish harvested — 1,870 sturgeon were taken from Lake Winnebago and 288 were caught in the Upriver Lakes.

Officials say the 1,870 sturgeon harvested from Lake Winnebago is the 6th highest harvest on record since 1940.

“That’s really pretty impressive when you consider that’s 75 spearing seasons, the majority of which had longer spearing days, no harvest caps, and seasons that were longer than 16 days,” Koenigs said.

Koenigs says it was a special day for the Drexler family from Oshkosh. The day started with 12-year-old Derek harvesting a 70.1-inch, 75.6-pound fish. But that shanty wasn’t done giving up fish. A half hour after Derek’s fish came through, his father Robert speared a 23.9-pound, 50.2-inch fish out of the same hole.