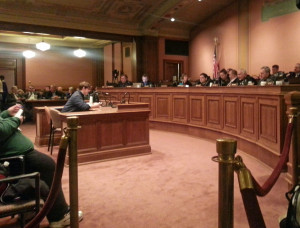 Controversial right-to-work legislation now heads to the Assembly floor, following a nearly 12-hour long public hearing on the proposal at the Capitol.

The Assembly Labor Committee heard from a long line of speakers Monday, with the vast majority of those registering in opposition to the bill. In often emotional testimony, many who testified spoke about their fears that the legislation would weaken the role of private sector unions in representing the interests of workers, potentially leading to lower wages and unsafe working conditions.

Terry McGowan with the International Union of Operating Engineers argued that unions offer job training to thousands of workers, which many businesses rely on to make sure their employees know how to do their jobs safely. He worried right-to-work could reduce access to that training by cutting off funding, and urged lawmakers to vote down the proposal. McGowan said “let’s not do this to Wisconsin. Don’t do this to our training and safety.”

Only a handful of people registered to speak in support of the bill. Greg Mourad with the National Right to Work Committee sought to counter many of the claims being made by opponents that the bill would lead to lower-paying jobs, pointing to studies that have shown wages increased in Indiana after they became a right-to-work state. Mourad argued workers should have a say in whether or not they want to join a union because “independent minded workers are being forced to accept a union as their bargaining agent and are being forced to work under contracts that actually harm their interests. It is an outrage to force people to pay for this so-called representation that they did not ask for, do now want, and would be better off without.”

Despite scattered applause throughout the hearing, Monday’s proceedings moved at a steady and relatively peaceful pace. While the chair of a Senate committee cut off testimony suddenly during a hearing last week, state Representative André Jacque (R-De Pere) allowed all who registered to testify a chance to speak on the bill. The hearing ended just before 10 p.m., with several Democratic lawmakers offering brief testimony on the legislation to close out the hearing.

The full Assembly is expected to open debate on the bill Thursday.