You are here: Home / Legislature / Assembly settles in for long night of debate on right-to-work 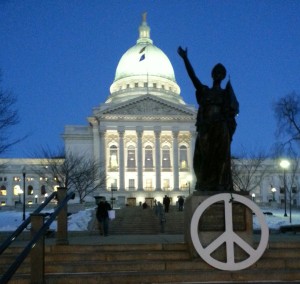 Debate on controversial right-to-work legislation got off to a rocky start Thursday, with protesters removed from the Assembly gallery during the opening speeches of what promises to be an all-night session. Members of the state Assembly have negotiated a 24 hour time limit for debate on the bill, which would have the session ending no later than 9 a.m. on Friday morning.

Members on both sides of the aisle have offered impassioned speeches on the legislation, which would prohibit businesses from negotiating contracts that require union membership or paying union dues as a condition of employment. Republicans contend the change is needed to help encourage new businesses to come to Wisconsin, while Democrats have largely been arguing that the bill would weaken protections for workers and result in lower wages.

Rep. Fred Kessler (D-Milwaukee) warned the bill would “cause chaos in the workplace” and told Republicans that they were making a big mistake by rushing to make Wisconsin the 25th right-to-work state in the nation. Kessler said “I don’t know why we want to do this. I don’t understand this.”

Rep. Joe Sanfelippo (R-West Allis) defended the proposal, arguing that it gives workers the freedom of choice when it comes to deciding whether or not they want to join a union. Rep. Jim Ott (R-Mequon) also noted that unions that are doing a good job will likely maintain their membership.

In a speech told in the meter of “The Night Before Christmas,” Rep. Steve Doyle (D-Onalaska) recapped the quick rush to pass the legislation, which was introduced just under two weeks ago. “Twas the day before the big vote, and all through our house, the Ds talked so long, it made the Rs grouse.”

Democrats have introduced multiple amendments to the bill, which has already passed the state Senate. None are expected to be adopted during a debate that is expected to stretch into the early morning hours of Friday. As Doyle noted in the closing of his speech, “but as it sits now, there’s no end in sight. Unfortunately Mr. Speaker, it’s going to be a long night.”