You are here: Home / Badgers / Badgers clinch a share of the Big Ten title (AUDIO) 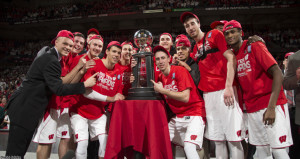 The Wisconsin Badgers wrapped up a share of the Big Ten Conference title on Sunday, knocking off the Michigan State Spartans 68-61 on Senior Day at the Kohl Center.

Wisconsin went right at the Spartans on offense, dumping the ball inside to Frank Kaminsky and Nigel Hayes.  Those two did the rest, combining for 45 points to pull out the win.

Kaminsky saved his best for his final home game, pouring in 31 points, pulling down 8 rebounds and assing three assists, three blocks and two steals.  Kaminsky hit 3 of 4 from three-point distance and 11 of 17 from the field overall.

Hayes hit 5-of-6 from the field in the first half for 10 points, beating the Spartans with quick spin moves to the basket.  He finished with 14 points and four rebounds, hitting 6-of-9 from the field overall.

Josh Gasser added nine points and Sam Dekker eight points and nine rebounds and the Badgers as a team hit 52% from the field.

If Michigan State coach Tom Izzo wasn’t a believer in Frank Kaminsky, he quickly became one.  After watching Kaminsky dismantle his Spartans, Izzo called Kaminsky the best player in America and said he’s throwing in his early vote for Kaminsky as the Player-of-the-Year.

The Badgers can still clinch the Big Ten title outright.  One more victory or one Maryland loss and the title will belong to the Badgers by themselves.

Wisconsin closes out with two games on the road, at Minnesota Thursday and at Ohio State on Sunday.

Maryland also has two games left, at Rutgers on Tuesday night and at Nebraska on Sunday.

AUDIO: Josh Gasser circled this one on his calendar a long time ago :17

AUDIO: Nigel Hayes says Frank K. is the best player in the country :17