You are here: Home / Badgers / Badgers winless streak against the Gophers stretches to 18-games 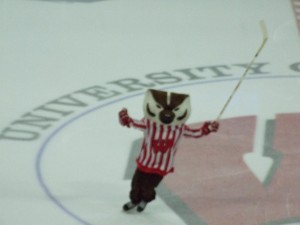 The 4th-seeded Wisconsin Badger women’s hockey team outshot Minnesota 35-23, but it was the Gophers that got the final say with a 3-1 win in the NCAA Frozen Four semifinals at Ridder Arena.

The top seeded Gophers extended their unbeaten string against the Badgers to 18-straight games and knocked Wisconsin out of the Frozen Four semifinal game for the second straight season.

UW freshman Annie Pankowski scored the Badgers’ (29-7-4) lone goal of the game 52 second into the second period and gave Wisconsin a 1-0 lead.  It marked her 21st goal of the season and 43rd point, both team highs.  Pankowski became the first freshman since Sara Bauer during the 2003-04 season to lead UW in goals and points.

Minnesota answered with three straight goals to close out the scoring in the second period and the game.  Maryanne Menefee tipped in a Megan Wolfe shot for the game winner.