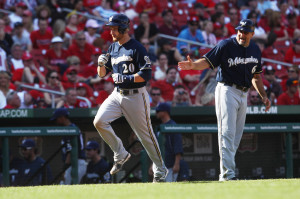 First baseman Adam Lind, bothered by back issues to date, made his spring debut.  He was 0-for-2 with a walk.

The Brewers shoot for their fourth straight win this afternoon, facing Seattle.

Brewers catcher Jonathan Lucroy had two hits in a minor league game and showed no problems with the hamstring injury that has kept him sidelined since February.  Lucroy was able to get out and run the bases and said he felt good.

Lucroy’s pink eye will keep him from playing in another minor league game until Sunday.  He could be back in the big league camp with the Brewers by early next week.

Reliever Francisco Rodriguez is expected to arrive in camp today and undergo a physical to make his new 2-year, $13 million deal official.