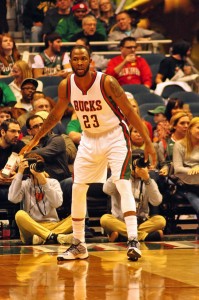 The Milwaukee Bucks have signed forward Chris Johnson to a second 10-day contract.

Johnson appeared in five games for the Bucks during the first 10-day contract and averaged 4.6 points and 2.0 rebounds in 20.0 minutes per game.

The Bucks are practicing today in New Orleans.  They’ll face the Pelicans in their next game, on Tuesday night.

The Bucks are 4-9 since the all-star break.  Part of the reason for their drop-off has been bench production.

Before the all-star break, the Bucks were getting 42.3 points a game from the bench.  Since the break, that numbers has dropped to 26 points a game.  They were ranked second in the NBA in bench scoring before the break and have seen that number fall to 27th.