You are here: Home / Packers / Cobb isn’t gone yet, but he may have one foot out the door (Video) 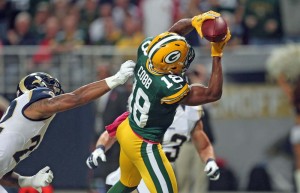 With that being said, it would appear that there’s a good chance Cobb will be playing elsewhere next season.

At the very least, it seems likely at this point that Cobb will test the free agent waters to see what’s out there.

The Packers decided not to use the franchise tag on Cobb, which would have included a price tag of more than $12.8 million.

The Packers instead, have discussed a potential deal for Cobb, a five-year deal averaging between $8 million and $9 million.  Cobb’s agent Jimmy Sexton’s response was to wait for more lucrative offers, which they believe will come from other teams in the open market.

Jacksonville and Oakland appear to be the top two teams with the most money to spend.

But every year, contract numbers climb.  And keeping Cobb around, would certainly help Jordy Nelson.  Without Cobb, Nelson could be an easier target for double teams without any repercussion.

Certainly, slot receivers don’t have the same value as their outside counterparts.  But that doesn’t mean Cobb doesn’t have great value to the Packers.

The Packers have possible options in Jared Abbrederis, Jeff Janis and even Myles White.  But they’re all unproven.  The 2015 draft is loaded with receiving talent and the Packers could certainly help themselves there.

Fans always think free agents should give the home team a discount, especially when the home team has Aaron Rodgers at quarterback.  Why wouldn’t a player take a little less to guarantee a spot in one of the league’s top offenses?

The problem is, there are no guarantees.  If a player passes on the big deal and gets hurt, is anyone going to pass the hat to allow the player the chance to recover what he could have had?  I didn’t think so!

Following are more of my thoughts on the Randall Cobb issue!