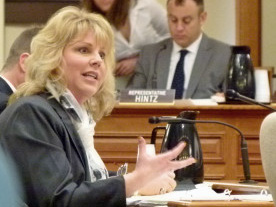 Controversial provisions in Governor Scott Walker’s proposed state budget could impact the future direction of the Wisconsin Department of Natural Resources. The Republican governor’s 2015-’17 spending plan would make the seven member Natural Resources Board – which currently has the authority to set DNR policy – a purely advisory body. The budget also cuts 18 staff positions from the agency’s Bureau of Scientific Services – equal to just over a third of the bureau’s allotted total.

Both changes are opposed by the executive director of the Wisconsin Wildlife Federation. “The foundation of natural resources management is scientific research,” said George Meyer. Meyer said the DNR’s science staff are “sort of invisible, hard-working people who really develop do all the research projects to manage all the fish and wildlife services in this state.”

In a statement to the Milwaukee Journal Sentinel, DNR spokesman Bill Cosh said the “governor’s proposal is asking the department to more closely align research to the priorities of the department’s divisions,” and that the agency will continue to conduct its own research and use specialists from universities.

“This is core work,” Meyer said of the DNR’s in-house science. “Any of the natural resources management that’s done in the state uses this foundational research. It’s vital.” Meyer said university scientists generally do more “theoretical, cutting edge research” as opposed to the applied science of the DNR staff, and that using researchers from outside the agency would be “much more costly.”

Meyer, who himself served as DNR Secretary during the administration of Republican Governor Tommy Thompson, is also highly critical of Republican Walker’s plans for the Natural Resources Board. He says making the board – whose members are already appointed by the governor – merely advisory would be “a serious setback to conservation” in Wisconsin.

Meyer said it’s critical that the board retain decision-making authority – and that he found the NRB played an important role during his time as secretary. “An advisory board you don’t have to listen to. You have to listen to the Natural Resources Board.”

Current DNR Secretary Cathy Stepp was seemingly in agreement with that assessment in the past, telling the Journal Sentinel in 2011 that the board is “a really, really critical part of Wisconsin’s history and it’s something that’s treasured by me.”

Stepp’s position had shifted by the time she briefed the legislature’s budget committee earlier this month, when she told lawmakers that while Governor Walker did not consult with her in advance on his plan for the NRB, she considered it a “smart way to go now.”

The Wisconsin Conservation Congress also opposes the change. “This proposed change would take the policymaking authority from the public arena to the political arena,” said WCC Chair Rob Bohman. “Giving the policy-making authority solely to the department secretary would potentially allow for important natural resource decisions to be made behind closed doors without any public vetting.”

Meyer said stripping the board of its policy setting authority would result in a decision-making process that is less visible and open to the public. “You’re also not going to get the same quality of people to serve an advisory board,” he predicted. “It’s hard to find people to be around to be advisors, as opposed to decision-makers.”