You are here: Home / News / Family of teen shot by Madison police officer speaks out (VIDEO) 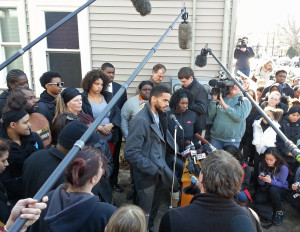 The family of an unarmed black man fatally shot by a Madison police officer last week expects to get answers from an investigation, but also urged calm in the wake of the shooting.

During a press conference outside the home where Tony Robinson Jr. was shot Friday night, his uncle, Turin Carter, said Monday that the family has confidence the Department of Justice will fairly review the shooting. Carter said “we trust them to handle this with integrity…we want them to act strictly as fact finders.”

Carter did express some frustration with the agency’s handling of the shooting though, noting that his sister, Robinson’s mother, had still not been able to view his body three days after the shooting. “I’m very upset with the way they’ve been treated,” he said. Wisconsin Attorney General Brad Schimel released a statement Monday afternoon, where he said the agency has assigned “teams of agents from the DOJ Division of Criminal Investigation offices around the state to work on this case.”

Speaking for the family, Carter said they continue to struggle with their loss. “It’s pretty much surreal,” he noted, “one second you look at hashtags, and you realize that’s my nephew.”

Despite their frustration, Carter said the family is calling on peaceful protests as a response to the shooting and added that they recognize the shooting is the result of actions taken by one individual, not an entire department. “We want no further tension with police officers,” he said.

Demonstrators took to the streets around Madison through the weekend and on Monday, with over a thousand high school and college students marching on the state Capitol building and Madison’s City County Building. While demonstrators demanded “Justice for Tony,” they did remain peaceful and Capitol Police said no arrests were made.