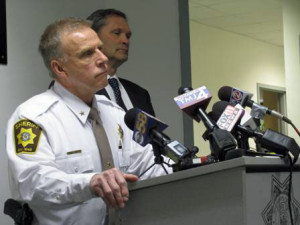 Prosecutors in Fond du Lac County have charged a Kenosha man with first degree murder in the death of an 18-year-old woman nearly 25 years ago.

Police arrested 61-year-old Dennis Brantner Friday for the death of 18-year-old Berit Beck of Sturtevant, whose body was found in a ditch outside of Waupun in the summer of 1990. Beck had been strangled, after authorities said she was kidnapped while traveling from her Racine County home to a computer class in Appleton.

Court records show Brantner’s fingerprints were found on items in Beck’s van, which was discovered in the parking lot of a Fond du Lac store two days after she was reported missing

Despite the arrest after a lengthy investigation, Fond du Lac County Sheriff Mick Fink said Monday that “there’s not anything to stand up and say ‘ boy, this is great, we got our guy.’ I don’t see a win in this. I just don’t.”

UPDATE: Bond was set at $1 million for Brantner during a court appearance Monday afternoon.