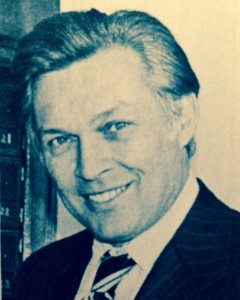 Former Wisconsin congressman Robert W. Kastenmeier has died. The Democrat represented Madison and Dane County in Washington from 1959 to 1991. “I think what people might remember about Kastenmeier was that he was one of the members of the committee which voted to impeach President Nixon in 1974,” said Jay Heck with Common Cause in Wisconsin.

“I suppose the areas that he would be most proud of would be the work he did on civil liberties and the leadership role he played in opposing the Vietnam War,” former Representative Dave Obey told The Capital Times. The Wausau Democrat said Kastenmier held the first teach-ins to educate people about the war.

Kastenmeier, whom Heck described as “a LaFollette progressive,” was defeated for reelection by Republican Scott Klug. “It was considered one of the big upsets in the country,” he said. “It’s been said that even Klug was taken by surprise.”

“He served in Congress at a time when there was more bipartisan cooperation on a lot of issues,” Heck said. “I know that he was well-regarded by Republican members of the Congress.” Kastenmeier was also an attorney specializing in patent law. “I don’t think the community ever understood how crucial Bob was to getting a fair shake on copyright issues,” Obey said.

Kastenmeier died at his home in Arlington, Virginia on Friday at age 91.