You are here: Home / Badgers / Kaminsky is Big Ten Player of the Year; Bo Ryan is Coach of the Year 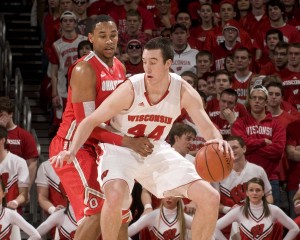 Senior Frank Kaminsky was one of four Badgers to earn All-Big Ten honors, while head coach Bo Ryan was recognized by conference coaches as the Coach of the Year.

Kaminsky was named 2015 Big Ten Player of the Year by both the media and coaches, including unanimous selection from the media.  Kaminsky was also a consensus first-team All-Big Ten selection.

Kaminsky is Wisconsin’s third Big Ten Player of the Year, joining Devin Harris in 2004 and Alando Tucker in 2007.  All three POYs have come in the Bo Ryan era.

After winning the outright Big Ten championship for the first time since 2008 with a 16-2 conference record, Wisconsin begins the postseason as the top seed at the 2015 Big Ten Tournament.  The Badgers open play in Friday’s quarterfinals at 11 a.m. against either No. 8 Illinois or No. 9 Michigan.