You are here: Home / Packers / Packers don’t use a tag on Cobb 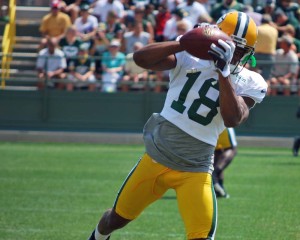 The Green Bay Packers opted not to use a franchise or transition tag on wide receiver Randall Cobb, with the deadline to do so passing yesterday.A franchise tag would have set the compensation for another team to sign Cobb at two first-round draft choices if the Packers would decide not to match an offer sheet.  If the Packers had used a transition tag on Cobb, they would have the right to match, but there would be no compensation if they let him go.

Using the franchise tag would have cost the Packers more than $12.8 million.  The one-year transition offer would have been more than $10.97 million.

If the Packers are going to get a deal done with Cobb, it will likely happen in the next few days.   They have exclusive bargaining rights with Cobb until Saturday when all free agents are allowed to speak with other teams during a three-day open window.

It’s not certain that the Packers will pay Cobb more than Jordy Nelson, who makes $10 million a year.  According to various reports, Cobb appears to be searching for a figure closer to $12 million a year.