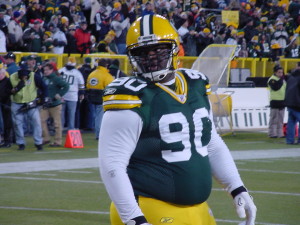 The Green Bay Packers liked what they got from Letroy Guion so much that they’re willing to give the defensive tackle a second chance.

The Packers signed Guion to a one-year contract, a deal first reported by ESPN.com’s Rob Demovsky.

Guion was arrested back in February on felony marijuana and firearm possession charges, but they were dismissed after he paid a $5,000.00 fine.

Guion could still face discipline from the National Football League.  The NFL’s personal conduct policy doesn’t require a conviction for a penalty to be imposed.

The NFL Network also reported this morning that nose tackle B.J. Raji has agreed to a one-year deal with the Packers as well.

Raji is coming off of surgery for a torn biceps muscle that he suffered in a preseason game.

Both Guion and Raji will be highly motivated because they’ll be working immediately for their next contract.  But there is a risk.  For Guion, it’s a character risk.  For Raji, it’s his ability to rebound from injury and be productive.