You are here: Home / Packers / Packers to resign Bulaga 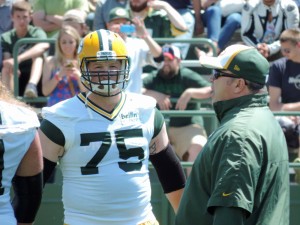 Bulaga may have turned down money to return to Green Bay, just like wide receiver Randall Cobb did.  But there’s also a good shot that the deal will be worth more than the Packers had initially wanted to pay.  There’s a chance the deal will make Bulaga the highest paid offensive lineman on the Packers roster.

Packers general manager Ted Thompson didn’t want to reach $7 million with Bulaga because then he’ll have to go higher when he attempts to resign other starters 2 and 3 years down the road.

But Bulaga was an important piece for the Packers offensive line, which Mike McCarthy called the best line he’s had in his time in Green Bay.

The Milwaukee Journal Sentinel reported today that they submitted a right of refusal tender to restricted free agent Sean Richardson.  The one-year, $1.542 million offer guarantees that the Packers will be able to match any offer that Richardson receives.