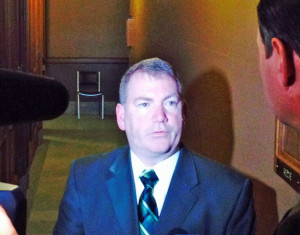 Wisconsin State Patrol Troopers are headed back to the bargaining table, more than a year after negotiating a contract with the state which would have provided raises averaging 17 percent. The legislature’s Joint Committee on Employment Relations voted 5-2 along partisan lines Thursday, disapproving the contract and barring a up-or-down vote by the full legislature.

“This is a mess, like no other mess I’ve seen in the state legislature when it comes to employer relations,” Fitzgerald said. “It is a disaster.”

Wisconsin Troopers’ Association President Glen Jones told the legislative panel that his 360 or so members just wanted a shot at that vote. “Speaking with their representatives, they hear that they’re supportive of it, they understand,” Jones said. “That’s all they want is a chance.”

“I’d love to be in the room. I’d love to be in there and negotiate something that makes sense,” said Fitzgerald, who said his members could support a three percent salary hike. “Right now, this doesn’t make sense as we sit here today. There is no way to get the support for this.”

Jones said his members pay has “tumbled backwards” over the past decade or so, and that most troopers could make more money working for other law enforcement agencies.

“These guys right here, there’s nothing keeping them other than their sense of duty and honor,” he said, indicating troopers seated behind him in a Capitol hearing room. “Duty and honor only goes so far. But when you can look at the agency in the area where you live and know ‘tomorrow I can have a 25% to 30% pay raise,’ you can only convince your spouse so long that you should stay.”