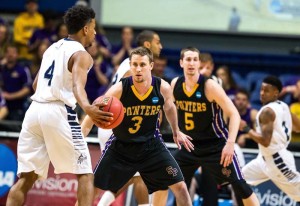 The Pointers knocked off Virginia Wesleyan 68-59 on Friday night at the Salem Civic Center to advance to the national title game for the fourth time in program history.  The Pointers are 3-0 in their previous three attempts, with the last NCAA Championship coming back in 2010.

Austin Ryf led all scorers with 21 points to lead the Pointers (26-5).

Augustana beat Babson (Mass.) 68-48 in the other semifinal game.