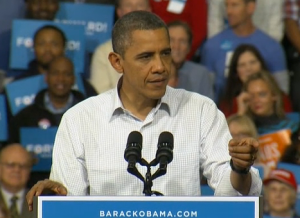 In a statement released Monday night, President Barack Obama said he was “deeply disappointed” in the decision to sign the bill, arguing that the “new anti-worker law in Wisconsin will weaken, rather than strengthen workers in the new economy.”

Obama said he would like to encourage Governor Walker to “try and score a victory for working Americans – by taking meaningful action to raise their wages and offer them the security of paid leave. That’s how you give hardworking middle-class families a fair shot in the new economy – not by stripping their rights in the workplace, but by offering them all the tools they need to get ahead.”

Governor Walker issued a statement on Tuesday responding to President Obama, saying “the President should be looking to states, like Wisconsin, as an example for how to grow our economy. Our reforms are moving Wisconsin forward and helping create family-supporting jobs for people in our state.”

Obama’s statement drew a rebuttal from Wisconsin Manufacturers and Commerce, one of the chief proponents of the right-to-work legislation. In a statement, WMC President Kurt Bauer said “It’s disappointing that President Obama has come out against a policy that gives workers freedom of choice in the workplace. The fact is, right to work states grow jobs and wages twice as fast as forced-union states do. By contrast, the President supports a wage policy that the Congressional Budget Office said will likely kill 500,000 American jobs. Gov. Walker remains focused on providing freedom and economic opportunity to workers.”