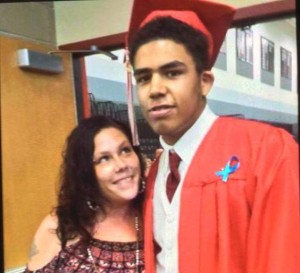 Protesters took to the streets of Madison, comparing Friday night’s fatal officer-involved shooting to what happened in Ferguson. The crowd was heard shouting statements such as “Who do we trust? Not the police!”

A state agency is leading the investigation into the shooting of the young black man, and more protests are expected throughout the weekend. Tony Robinson was shot and died when CPR efforts failed. The Sun Prairie 19-year-old was identified as the victim early Saturday, after Police Chief Mike Koval met with Boys and Girls Club of Dane County CEO Michael Johnson and members of Robinson’s family.

According to a police report, at approximately 6:30 pm, the Madison Police Department responded to a “Check Person” disturbance on Williamson Street. While en route responding officers were advised that additional calls were being received about the same individual.

The Robinsons asked that demonstrations to remain peaceful. A prayer service was expected at Christ the Solid Rock Baptist Church Saturday. Large groups of protestors gathered in several areas of the city following the shooting.

AUDIO: Hundreds of protesters marched through the streets shouting phrases like, “Black lives matter” and “Indict, convict; send those killer cops to jail. The whole damned system is guilty as hell.” (:26)

Michael Johnson made several comments on Facebook over the weekend:

I am calling on all Madisonian’s to come out tonight at Fountain of Life Church at 4pm.

Wisconsin law requires an agency outside the police or sheriff department involved in a shooting to handle the investigation. Police can only say they responded to calls of shots fired along the 1100 block of Williamson Street Friday. Chief Koval said during news interviews, an officer was in the area to follow up on reports of a man wandering in traffic, and the officer followed the man to a house where he was attacked by the man.

State Representative Chris Taylor was gassing up her car across the street as this happened. She calls it a tragedy, and describes it as “a scary situation she never expected to find herself in.” Taylor co-sponsored the 2014 law mandating officer-involved deaths in the state be investigated by an outside agency. The Wisconsin Division of Criminal Investigation is in charge of the case.

Madison Mayor Paul Soglin said, “I hope everyone can remain patient while the investigation is carried out.” Soglin also expressed sympathy for Robinson and his family. While this story is already receiving significant national attention, others have suggested everyone wait until all the facts in the case are revealed before jumping to conclusions.

“I offer my sympathy to the family of the young man who lost his life  As a parent, I can only imagine the heartbreak they must be feeling right now in the wake of this tragedy.

Likewise, I am concerned for the officer involved in this incident, who I imagine is experiencing great trauma, as wel

They are all in my thoughts and prayers.

The Wisconsin Department of Justice Division of Criminal Investigation will conduct a thorough, professional and transparent investigation into this incident. DCI agents have been on the scene gathering information since we were notified early last evening. Any person who witnessed events or may have images or video that could support this investigation is encouraged to call DCI at 608-266-1671.

Meanwhile, friends of the family have started an online GoFundMe account to raise money for the man’s funeral. At the time of this posting, there were $2,635 donated to the fund.

Also, there’s a Facebook page is support of the Madison Police Department that was created over the weekend.