You are here: Home / News / Right-to-work hearing under way at Capitol 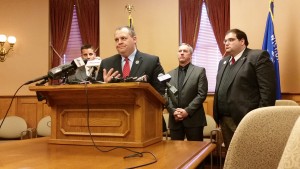 Talking to reporters in advance of the public hearing on right-to-work legislation, Assembly Republicans say there’s no reason to delay implementation of the controversial bill if it’s signed into law.

Representative Chris Kapenga (R-Delafield) says it’s not a surprise, so there’s no need for a 90-day delay. He adds, it’s not a complex bill; it’s just a few pages. “That discussion has already happened. I have not seen any convincing evidence to show me why that should take place.”

Jacque has set a seven-minute time limit for testimony lasting until 8 pm, but will consider staying longer if necessary or shortening time limits on public comments. “That’s certainly something that I’m gonna be discussing with my fellow committee members. We don’t really know at this point how many people are looking to testify.”

Under the legislation, employers can’t require workers to pay union dues as a condition of employment. Opponents of the bill are concerned about wages and worker training.

The Senate quickly approved the bill (17-15) last Wednesday. The full Assembly will take up the bill later this week, likely Thursday.

*Update: At 11:40 committee chair has announced that he talked with Democrats on the panel and they all agreed to reduce the time limit for testimony to five minutes.