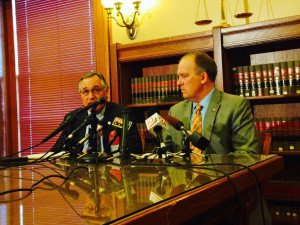 The investigation into a fatal shooting by Madison police will take at least two more weeks – and no information will be released until it is completed. “Releasing information piecemeal, as I think we’ve seen with some of these officer-involved death cases nationwide, has caused a great deal of turmoil,” Wisconsin Attorney General Brad Schimel said during a media briefing Thursday on the investigation into the fatal shooting of 19-year-old Tony Robinson by a Madison officer last Friday. Robinson was black, and Officer Matt Kenney is white.

“We encourage the public to be patient and wait for the outcome before they make their judgments about what did and did not happen,” Schimel said.

Division of Criminal Investigation chief Dave Matthews says most results should be ready in about two weeks, but there are some variables like toxicology reports which the agency won’t have control over. “So when we say that within two weeks, we should have 80 percent of our work provided to the district attorney, that’s taking those things into account,” Matthews said.

Schimel said that to date the investigation has involved more than 100 investigative reports, more than 60 witness interviews, and interviews of more than 40 separate households as part of the neighborhood canvas. A core group of 29 DCI agents, analysts and supervisors have been part of the process, along with additional staff from DCI offices in Appleton, Milwaukee and Wausau.

Matthews explained that there’s a lot of material to assess. “We have digital forensics going on, on all of the digital devices that everyone is carrying today. That is a substantial load in itself. There’s going to be, potentially, video images relating to these sorts of observations. The evidence can be overwhelming.”

It will be up to the Dane County DA to determine what charges – if any – will apply in the case. “We let the district attorney know as we’re going through this process, where we’re at, what we’re seeing,” Matthews said. “We can’t redo this.”