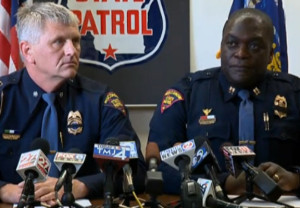 As investigators continue working to piece together the events that led up to a shootout in Fond du Lac, the former colleagues of a slain state trooper say he did everything he was supposed to leading up to the fatal confrontation.

Trooper Trevor Casper was killed Tuesday evening after following a car matching the description of one tied to a bank robbery earlier in the day in Wausaukee. State Patrol Lieutenant Colonel Brian Rahn says Casper did everything he was supposed to after spotting the vehicle, and kept in communication with dispatch. Rahn said “it was textbook, from the time he made contact with the vehicle…until the event was over.”

The state Department of Justice said that the suspect killed in the shootout was Steven Timothy Snyder, who video confirmed was responsible for a bank robbery in Wausaukee earlier in the day Tuesday. The DOJ also said that Thomas Christ of Wausaukee was also shot and killed Tuesday afternoon, after an encounter with Snyder near Christ’s property.

A spokeswoman with the DOJ said it has not been confirmed that Snyder was linked to other bank robberies.

The State Patrol said that Casper was on his first solo day of patrol on Tuesday, after just graduating from the academy last December. Captain Anthony Burrell said Casper was “very dedicated to his job, his family, and his friends.”

Casper’s family released a statement Wednesday thanking those who have shown support following such a horrific loss. “As a family we are so deeply honored that our son served as a law enforcement officer with the Wisconsin State Patrol and we share in their grief and loss. We are so deeply saddened by this loss and wish to thank everyone who has assisted us during this time.”