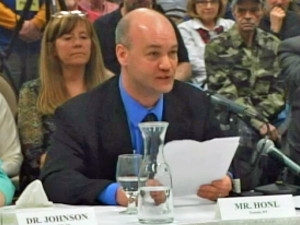 House and Senate committees heard testimony on Monday, regarding the opiate painkiller scandal at the Tomah Veterans Administration Medical Center. Members of the Senate Committee on Homeland Security and the House Committee on Veterans’ Affairs are looking into the practices at the Tomah VA, allegations of over-prescribing opiates to veterans, and retaliatory behavior toward whistleblowers at the facility.

“I truly believe that Dr. Houlihan is a dangerous man, and what makes him so dangerous is a lack of respect for the medication in which prescribes,” Johnson said. “The quantities of narcotic medications coming out of the Tomah VA is irrefutably unsafe.” Johnson was subsequently reinstated at the VA. Houlihan and Tomah VA director Mario DeSanctis have been reassigned as the investigation into Tomah continues.

Also testifying on Monday was Ryan Honl, the whistleblower whose efforts finally helped to bring the overuse of opiate painkillers at Tomah to light. “The greatest problem requiring immediate change is for President Obama to nominate a permanent inspector general, and for Senate to confirm without partisan horse trading,” said Honl. “The VA Office of Inspector General has the blood of veterans on its hands.”

Marv Simcakoski is the father of Jason Simcakoski, a Marine veteran who fatally overdosed at the Tomah center last year. “I really got to know understand how Jason struggled with his addiction problem, only to have it over fueled time and time again by the Tomah VA doctors,” Simcakoski testified.

“I believe the VA’s over reliance on opioids has resulted in getting our veterans hooked instead of getting them help,” said Wisconsin Senator Tammy Baldwin, who attended the hearing. “Over-prescription of opioids at the VA is clearly a root problem, but we must not lose sight of the fact that it is growing into a weed of addiction whose impact is being felt beyond the VA walls. The devastation of addiction, on families and our communities, that is being grown at the VA is stunning.”

The field hearing is the latest official response, since the problems at Tomah were brought to light through a January 9 story by the Center for Investigative Reporting. The story related the death of Jason Simcakoski, as well noting that opiate prescriptions at Tomah grew by over 500 percent from 2004-to-2012, while nationally, the numbers of veterans on VA prescribed opiates dropped by 6 percent over the past year, as the VA moved to reduce pill usage and seek alternative treatments. According to the CIR report, the Tomah VA under the leadership of DeSanctis and Houlihan was widely referred to as “Candyland” by veterans receiving treatment there.

“Legislatively, this hearing is just the first step,” said Wisconsin Senator Ron Johnson, who chairs the Senate Committee on Homeland Security. “In order to solve a problem, we must fully understand it and be willing to admit we have one. To that end, today we will hear from surviving family members, former employees, and representatives from the VA, and the VA Office of Inspector General.”