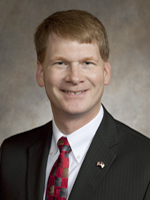 The chair of the state Assembly Education Committee says an open meetings complaint filed by a liberal group is nothing more than a “frivolous” waste of time.

The complaint, filed this week by One Wisconsin Now, alleges that state Representative Jeremy Thiesfeldt (R-Fond du Lac) violated state open government laws on Tuesday, when a committee he chairs held a meeting without notice to discuss a vote on school accountability legislation. The meeting followed a joint hearing with the state Senate Education Committee, and came at the request of Democrats on the panel who were concerned about an amendment to the bill. In the complaint, OWN argues “Despite this clear lack of notice, Chair Thiesfeldt did, in violation of the open meetings law, convene a meeting of the Assembly Committee on Education and discuss Assembly Bill 1 and proposed Assembly Substitute Amendment 1 to Assembly Bill 1.”

Thiesfeldt fired back at the group, calling OWN “an organization of liberal political hacks who can’t get candidates elected to office.” He said the complaint is nothing more than an attempt to intimidate conservatives from acting on an important issue.

The scheduling issue lawmakers were discussing dealt with an amendment to a school accountability bill, which Thiesfeldt planned to take up on Thursday as part of a vote to advance the legislation out of committee. He cancelled the executive session the next day, citing the possibility that a compromise with the state Senate on the issue might be in the works.

Thiesfeldt noted that he told Democrats on the committee that the school accountability bill had not been noticed for Tuesday’s missing and they could not discuss an upcoming vote on the bill. However, he said they could discuss scheduling. The Fond du Lac Republican said “I’m starting to wonder if there wasn’t some sort of collusion ahead of time between One Wisconsin Now and the Democrats on the committee to try to bait me into an open meetings violation…if you watch the tape, I consistently told them we cannot discuss that.”