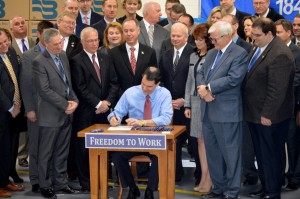 Governor Scott Walker signed the so-called right-to-work bill into law during a private ceremony at Badger Meter in Brown Deer, near Milwaukee. He said, as he adds “tool after tool after tool for our job creators, this is one more big tool to help places like Badger Meter make the case when they can put jobs any where around the world that Wisconsin is the right place because Wisconsin yet again showing ‘We Are Open For Business’ means more than just a slogan.” Walker said, “It means the way of operating and doing business here in this great state.”

Badger Meter president and CEO Rich Meeusen said his company has good a relationship with the union, and will continue to do so as they create more jobs following the governor’s signature. “The new equipment will be installed right here. A dozen new manufacturing jobs will be created right here. Future growth of the product line will eventually result in 30 to 50 new jobs right here in Wisconsin.”

AUDIO: Meeusen said workers can join unions, if they so choose. (:34)

Under the legislation, employers would be prohibited from requiring workers to pay union dues as a condition of employment. Opponents of the bill are concerned wages would be reduced and worker training would be at risk.

Assembly minority leader Peter Barca (D-Kenosha) called the legislation, which was the subject of numerous protests by labor groups, “an example of right-wing fanaticism on steroids.” Barca last week said, “There are so many reasons why right-to-work is wrong for Wisconsin. It will drive down wages and hurt our middle class and small businesses. It will interfere with private-sector business practices. It will put our state’s great training programs at risk.”

The private ceremony was attended by Republican lawmakers, the lieutenant governor, and representatives from Wisconsin Manufacturers and Commerce. The bill takes effect immediately.