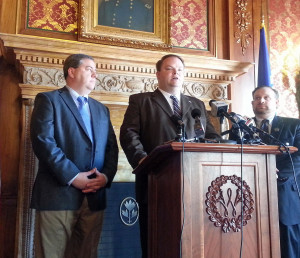 As some cities in Wisconsin grapple with how to handle the growing popularity of rideshare services, state lawmakers are proposing statewide standards for the emerging companies.

The bill introduced at the Capitol on Monday would require rideshare services, which typically connect drivers and customers through mobile phone applications, to apply for a state license and pay an annual $5,000 fee. Drivers, who operate as independent contractors, would have to pass background checks, operate vehicles that meet strict safety regulations, and carry at least $1 million in commercial insurance.

State Representative Tyler August (R-Lake Geneva), a co-author of the proposal, said during a news conference Monday that rideshare services have the potential to help numerous communities in the state, which may not be large enough for cab companies to operate in currently. He said rideshare aps present a “new and emerging market, and as technologies within this sector continue to evolve, our statutes need to evolve right along with them.”

The legislation has bipartisan support. State Rep. Cory Mason (D-Racine) said it will “allow for ridesharing in Wisconsin to grow while ensuring strong consumer protections will remain.”

The bill would overrule any local ordinances that have already been adopted in communities, such as Madison and Milwaukee. August said a statewide standard is preferable because it prevents a “patchwork of ordinances” from creating problems for drivers, who may cross city lines in larger markets and have to deal with different regulations in the process.

Rideshare services, also known as “Transportation Network Companies,” currently operate in Madison, Milwaukee, and Green Bay. Backers of the bill believe its passage would help encourage the expansion in more communities across the state.