You are here: Home / Fires/Accidents/Disasters / Wisconsin not immune from possible train derailment 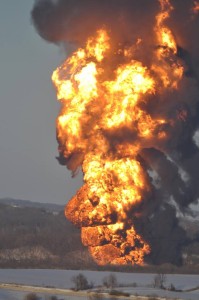 State Railroad Commissioner Jeff Plale said the rapid growth of rail traffic could mean a fiery wreck here, similar to one last week in northwest Illinois. Though, he said he doesn’t want to alarm anyone. “We’ve been very fortunate” Plale repeats for emphasis, “We’ve been very fortunate. I don’t want to say that it’s inevitable, but we’re prepared in the event that it does happen.”

AUDIO: The Burlington Northern train that derailed in rural Illinois Thursday passed through the Badger State just moments before it jumped the tracks and caught fire. (:17)

Plale said the rail industry is “proactive,” and going to “great lengths” to prevent disasters. “We work very hard with partners in the railroad industry, with local governments to make sure that the tracks are in good shape, that the crossings are safe, that the proper circuitry is there.”

Tank cars on a pair of recent derailments had a higher safety standard than federal law requires, but Plale acknowledged nothing’s ever 100 percent. “You prepare for the worst and you pray to God that it never happens.”

Plale said, “99.997 percent” of all rail shipments make it to their destination without incident. He said no other mode of transportation can claim that. “It’s a very, very safe way of transporting goods.” But he said, “When it goes wrong … it goes wrong.”

On Saturday, a CN Rail train carrying oil derailed in Ontario and caught fire. No injuries were reported.